A New Twist on Storytelling

Usually when a book ends, the story's over. Not so for this beautiful, chain-smoking female serial killer, who has suddenly resurfaced after leaving behind her personal memoir, Drawing a Blank, and going into hiding.


And the story continues...

A few months ago, my German Shepherd, Gable, got very sick. I know I swore that I would never be seen or heard of in this world again, but I couldn't take the stress. Months of living in the middle of nowhere had pushed me to the limit, and with Gable sick there was no one for me to talk to, and no one to talk back. Stella never was a very good listener and she's busy with her pups.

So I drove to a town 50 miles away, in a disguise that didn't accentuate how hot I am, but instead made me blend with the crowd. I bought an iPhone using one of my many fake IDs, got a great unlimited data plan, downloaded an IP blocking app that I hacked to make foolproof, and started a Twitter account.

Soon I had to make the long trek into Toronto in my best disguise yet and take Gable to the vet. While I was there I overheard some people talking about a book coming out: the personal memoirs of a smoking hot, chain-smoking female serial killer. I knew it was mine. Beech had found it and for a while I thought that he was the person who published it under the pen name R.K. Finch. I was pretty angry at first and tweeted about it.

I never thought anyone would put two and two together and figure out who I was much less where I was, but it turned out I was wrong.

One day not long after, someone Tweeted at me with a link to a YouTube channel. It had several short cell phone videos of my house and property, each with a message taunting me. I answered my stalker back on Twitter, and he would respond within the next day or so along with a new video. This guy had a lot of nerve thinking he could stalk me, much less catch me, and soon enough he paid the price - with his life. After his murder I took his cell phone and used it to change the password on the YouTube account. And then I had an idea.

I used my iPhone to film myself doing a few readings of my own memoir and posted them on the YouTube page. Eventually I realized that I'm actually not at all angry that someone published my chronicles of sex and murder. I'm actually, in a deadpan sort of way, glad that people can read about the dirty Internet executives and politicians who met their untimely end at my hands. I'm glad people can understand why I did it, and why I enjoyed doing it.

Internetland is an interesting place to exist within. I use Twitter to follow my three favourite things: executives, politicians and murder. It's like a big barrel of potentiality.

So buy my memoir, and watch my story continue to unfold within the safe confines of the web. Talk to me on Twitter if you want; just make sure you keep an eye out because you never know who's behind you. 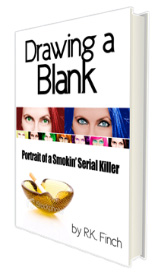